I have made some progress on the Bad Moons. 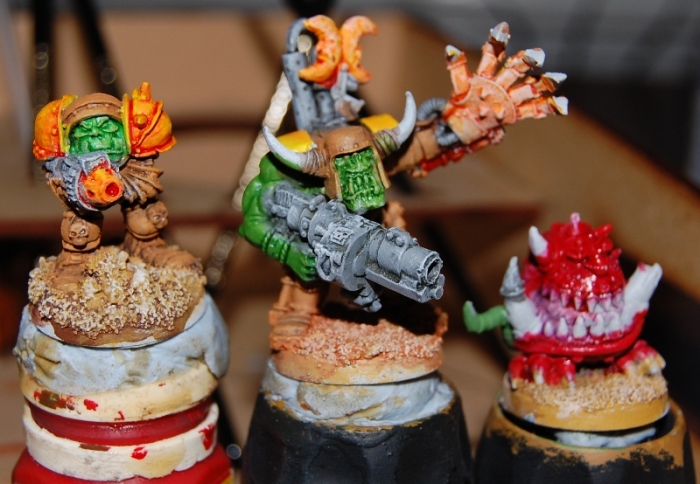 I was feeling a bit burnt out with the orks, so I decided to do some basing – something easy and requiring little thought to keep up momentum but without being too taxing. I basically just chose a bunch of figures I wanted to paint up, without them being connected to any particular project.

I love the scribe; one of my all time favourite 40K minis, even though it’s not from 2nd edition. There is a real dearth of civilian types in 40K, models and fluff, since the end of the Rogue Trader era and this figure goes some way to correcting that. I’m not sure who the sculptor is.

I converted Andreah (inspired by this conversion on the excellent Tales from the Maelstrom blog). She will be part of a Rogue Trader’s crew, or an Inquisitorial hench-woman or somesuch thing at some point. I chose to use a pistol from one of the old Striking Scorpions just because it is about half the size of the modern plastics, and this very slight miniature needed a smaller and more elegant weapon.

This conversion was inspired by Thomas David’s winning entry from Golden Daemon (France) 1998. She may be a preacher to accompany my eventual Sisters of Battle army, or a sanctioned psyker, or an Inquisitorial hanger-on; at this stage I don’t know, I just converted her for the joy of it. The hand holding the book is from a Rogue Trader Imperial Guard Commissar, whose remains will be converted into something else soon(ish).

The psyker will be named Lord Varlak, before his fall from grace, inspired by the excellent battle report from White Dwarf 187 (see here for an excellent review of the issue with many scanned photos). He will accompany any Imperial forces as ordered by his superiors. Likewise the assassin (a fantastic classic model; I’m not sure the later assassins, much as I like them, are superior to this fellow).

And some random animals, just because. The dogs will of course accompany any appropriate 40K or fantasy characters depending on the character’s mission, whilst the others are jungle-dwellers and background elements (there are 2 more, not pictured, Reaper iguanas, also).

This one is not so random. It is not a cat, but a Gyrinx (see here). It will accompany a psyker, probably Imperial or Eldar. It is an excellent model, and I wish I had ordered more than one in retrospect.

10 thoughts on “On the Paint Table”

Is Alex of Leadballoony running a Fembruary challenge this year? I don’t know but out of an abundance of caution I made sure to finish a female miniature this month. Handily it will also help toward my 2nd ed Army Challenge II entry... a classic female eldar model, going for tabletop quality to get this army finished this year 💪 #classic40k #40k2ndedition #eldar #fembruary #alaitoc #paintingwarhammer #40k2ndAC
Almost finished with some of these guys... #wip #classic40k #eldar #40k2nded #40k2ndAC #paintingwarhammer